The Climate and Biodiversity Nexus: Interdependent Challenges and Responses 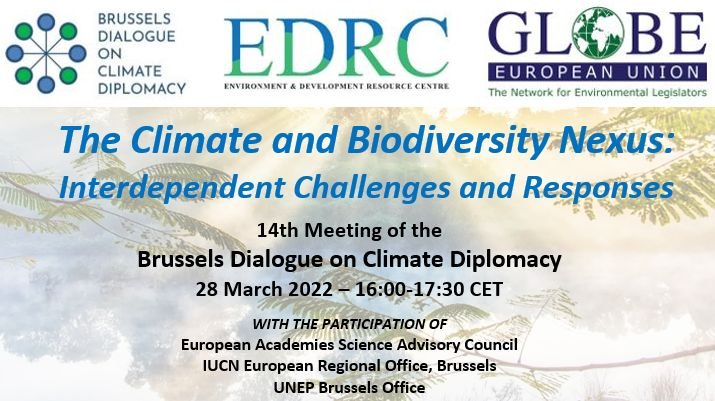 14th Meeting of the Brussels Dialogue on Climate Diplomacy

The aim of the meeting - co-organised by EDRC and GLOBE-EU - is to provide participants with insight into the inter-linkages between climate change and biodiversity loss – both in terms of the interconnected challenges and the need to address the two threats to environmental and human security together in a more coordinated way.

The meeting is being organised ahead of the second part of the Fifteenth meeting of the Conference of the Parties (COP 15) of the Convention on Biological Diversity (CBD). Phase one took place in Kunming, China and virtually, from 11 to 15 October 2021 and included a High-Level Segment from 12 to 13 October.

According to the Geneva Environment Network site: With the participation of almost 2,918 delegates in Kunming, and 2,478 connecting online, part one of the UN Biodiversity Conference set the stage for the adoption of an effective post-2020 global biodiversity framework at the resumption of the meeting in Spring 2022. The conference’s two-day High-Level Segment opened with the announcement by Chinese President Xi Jinping of the 1.5 billion-yuan (about $233 million) Kunming Biodiversity Fund, saw the adoption of the Kunming Declaration, where Parties to the Convention on Biological Diversity committed to negotiate an effective post-2020 global biodiversity framework".

Phase two of the COP 15 in Kunming, has been rescheduled to take place in the 3rd quarter of 2022. According to the CBD website COP-15 will be held in the August 2022 (dates to be confirmed). 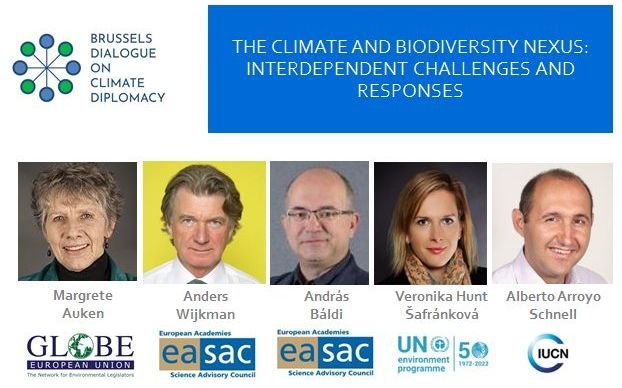 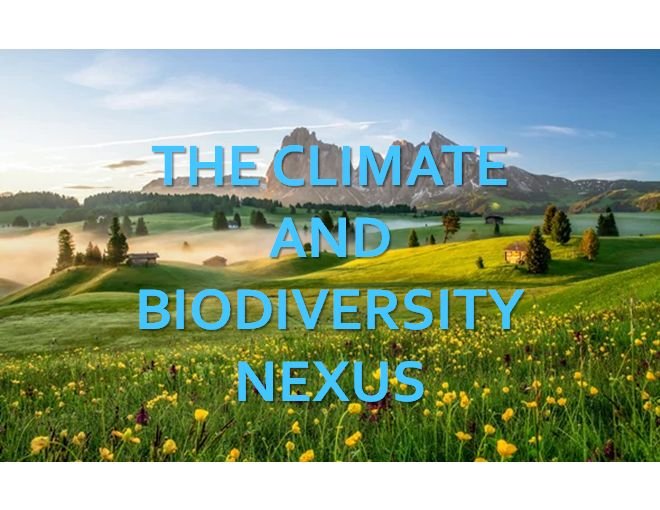 16:00 : Welcome and Introduction to the meeting by the Moderator: Ronald A. Kingham, Executive Director, EDRC

16:05 : Introductory Remarks by the Panelists:

17:00 : Comments and Questions from the Participants / Responses by the Panelists

17:25 : Closing Remarks by the Moderator and the Co-organizers 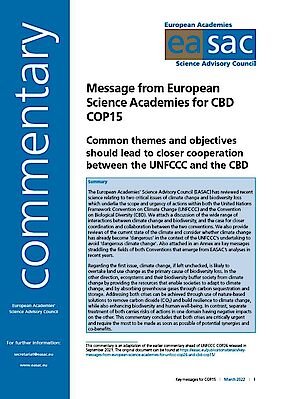 The European Academies’ Science Advisory Council (EASAC) has reviewed recent science relating to two critical issues of climate change and biodiversity loss which underlie the scope and urgency of actions within both the United Nations Framework Convention on Climate Change (UNFCCC) and the Convention on Biological Diversity (CBD). We attach a discussion of the wide range of interactions between climate change and biodiversity, and the case for closercoordination and collaboration between the two conventions. We also provide reviews of the current state of the climate and consider whether climate change has already become ‘dangerous’ in the context of the UNFCCC’s undertaking to avoid ‘dangerous climate change’. Also attached in an Annex are key messages straddling the fields of both Conventions that emerge from EASAC’s analyses in recent years.

Regarding the first issue, climate change, if left unchecked, is likely to overtake land use change as the primary cause of biodiversity loss. In the other direction, ecosystems and their biodiversity buffer society from climate change by providing the resources that enable societies to adapt to climate change, and by absorbing greenhouse gases through carbon sequestration and storage. Addressing both crises can be achieved through use of nature-based solutions to remove carbon dioxide (CO2) and build resilience to climate change, while also enhancing biodiversity and human well-being. In contrast, separate treatment of both carries risks of actions in one domain having negative impacts on the other. This commentary concludes that both crises are critically urgent and require the most to be made as soon as possible of potential synergies andco-benefits.

The Geneva Biodiversity Conference - 14 - 29 March 2022 - is be covered in detail by the IISD Earth Negotiations Bulletin with daily reports. 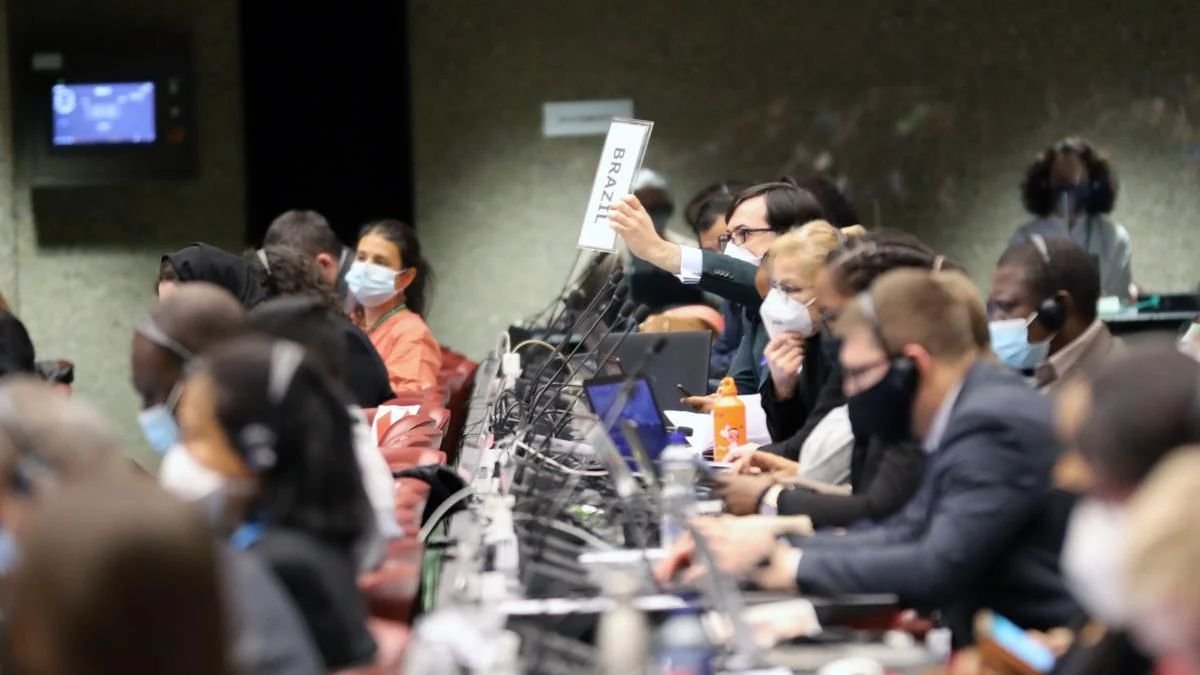 A separate article entitled "Next Steps for the Post-2020 Global Biodiversity Framework" published on 17 November 2021 is introduced by saying "While a lot of attention has gone to climate talks at the end of 2021, countries are also negotiating biodiversity targets".

"In the face of unprecedented biodiversity loss and amid a global pandemic, countries are negotiating new targets to halt ecosystem decline by 2030 and shift into biodiversity restoration by 2050. The new goals—called the post-2020 Global Biodiversity Framework—are far from settled". 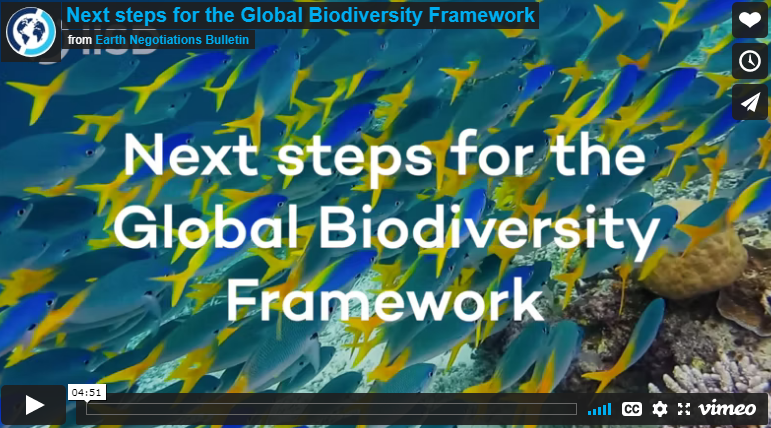 Watch the video report by Earth Negotiations Bulletin writer and editor Wanja Nyingi as she "explains where progress is being made, where parties to the Convention on Biological Diversity are diverging, and what to expect when talks shift into a higher gear in ... an in-person meeting in Geneva".

Biodiversity: Everything You Need to Know 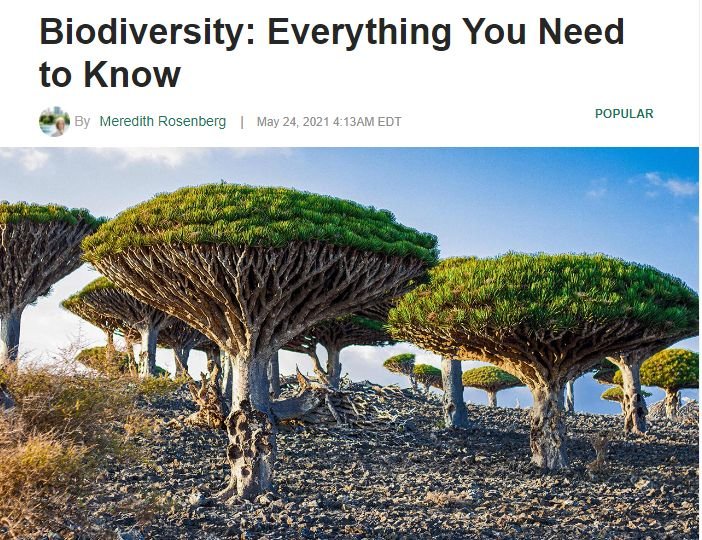 "The world has reached a critical make-or-break point for preserving a million species at risk for extinction, some within the next few decades. The issue may seem overwhelming, much like climate change, but it’s not hopeless. As with anything related to the environment, getting involved at a local level, learning about the current issues and becoming a conscious consumer are good starting points for fighting back against biodiversity loss".

This guide to understanding biodiversity is a comprehensive overview by EcoWatch senior editor,Meredith Rosenberg. The extensive report covers such topics as: 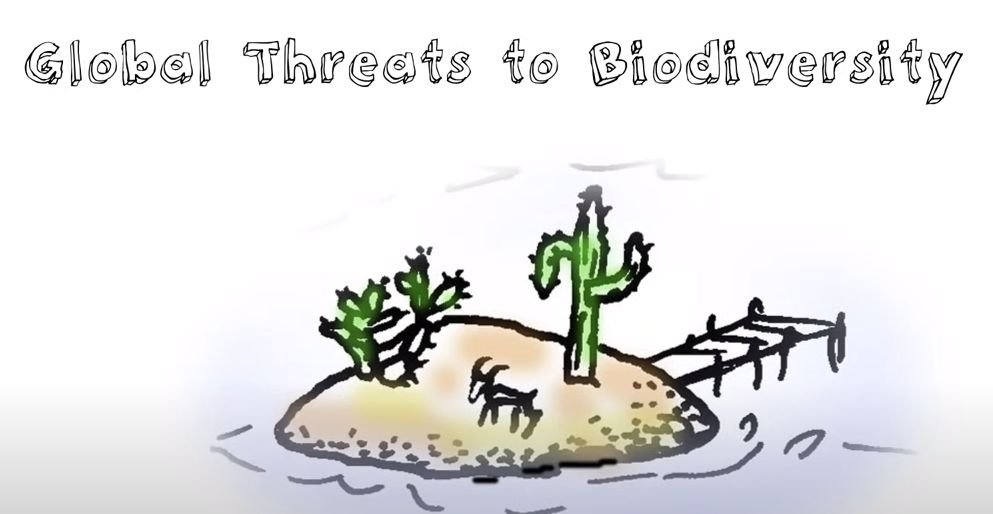 This animated tutorial from the California Academy of Sciences provides a great introduction on "What is climate change and why does it receive so much attention these days? Human activities are heating up Earth, with far-reaching consequences, changing biodiversity levels and distributions at alarming, unprecedented rates". >>> Watch the tutorial >>>