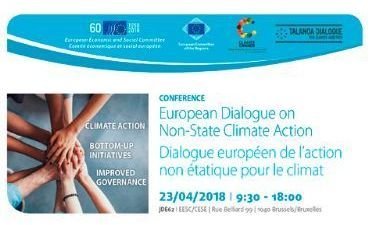 The shift towards a low-carbon and climate-resilient economy has been driven largely by bottom-up initiatives led by citizens, innovative businesses and various civil society stakeholders, as well as by local and regional authorities, collectively referred to as non-state and sub-national actors. In recent years, the number, scope and scale of non-state climate actions has grown rapidly. However, non-state actors still encounter obstacles that make it difficult for them to initiate and implement their climate actions successfully.

In response, the European Economic and Social Committee, the European Committee of the Regions and the Climate Chance Association organised a regional Talanoa dialogue in Brussels on 23 April 2018 to launch the European Dialogue on Non-State Climate Action. The purpose of this event was  to put forward an action plan aiming at assessing, recognising, accelerating and supporting climate actions, as well as improving governance.